I hope you’re all well!

If you’re planning on reading this post and you’re hungry, I’m sorry but this is only going to make things worse for you.. on the plus side, if you’re in Chester you can at least satisfy your hunger by paying The Alchemist a visit.

The Alchemist finally opened up in Chester last month, a very impressive cocktail bar/restaurant, replacing the building’s predecessor Gin Rickie’s and causing shaking things up for its rivals, Bar Lounge, The Botanist, The Architect and Kuckoo (to name a few). I was lucky enough to be invited for brunch last weekend* (6th August), and honestly, I couldn’t wait to visit.

The Alchemist in Chester is one of 11 other sites across the UK, originating in Spinningfields, Manchester its popularity has allowed the business to invest 1.6 million into renovating each site. I’ve seen photos of countless blogger events over the years (especially at their Leeds site), so I knew these guys knew exactly how to knock up an amazing cocktail, but could they do a good brunch to match..?

The short answer is yes.

I was booked in for 11am on Sunday, my friend and I walked in and were greeted immediately by one of the barmen, who told us we needed to head upstairs for the restaurant. 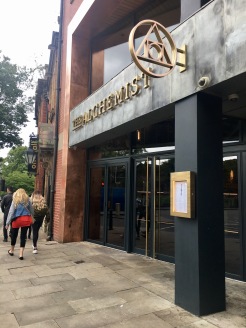 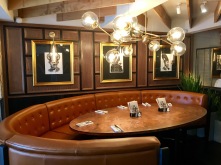 I’ve mentioned in a previous post about a different restaurant how I love the industrial decor look; you can see straight away that The Alchemist takes this idea and goes to the next level with it. You walk in and see sheets of copper, corrugated iron and partially exposed brickwork on the stairs mixed with elaborate black and gold embossed wall art, soft luxurious furnishings, leather chairs and sofas, glass cabinets filled with bottles and flasks and artfully placed filament light bulbs. This place oozes quality, you can tell that very little expense has been spared.

The dry-ice budget alone must be astronomical…

Anyway, we were seated at a booth, which was divided in such an interesting way. Instead of creating physical divides each booth is separated by a kind of metal framework that gives the illusion of a divide, but actually it still allows lots of light through the whole restaurant – I thought that was quite interesting because a lot of places I’ve visited in Chester tend to create a dark, dimly lit space for people to enjoy their drinks, it’s nice that The Alchemist is doing something different. 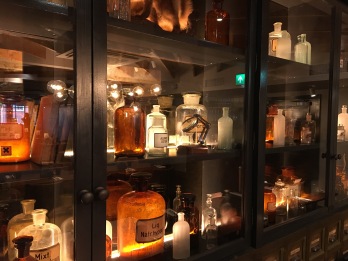 In spite of it being 11am, I thought it would have been pretty rude to show up and not try at least ONE cocktail, so I asked our lovely server Alex for some recommendations.

You could quite easily get lost in the cocktail menu, it’s HUGE! There was no way I could decide exactly what I wanted (at 11am) without spending half an hour reading through everything.

Thankfully Alex recommended Peaches & Cream, The Alchemist’s take on a peach Bellini which was light and entirely appropriate for breakfast (otherwise I would have picked something Whiskey based which is way too heavy). My friend ordered the non-alcoholic Banana Manana which was incredibly creamy, rich drink, but he loved it which was great. 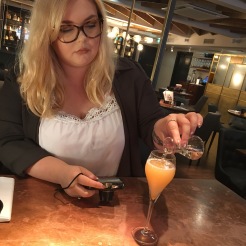 We were also given a bottle of water which was topped up constantly, which meant our cocktails lasted even longer.

Looking to the menu, The Alchemist supplies all the breakfast essentials, you can have a Full English, Eggs Benedict , a Proper Buttie or simple granola and yogurt, or something a little different, like Huevos Rancheros, Steak, Eggs and Hash Browns, or the Mish Mosh (which is exactly as it sounds, a beautiful combination of everything).

My friend went for The American; Belgian Waffles with eggs (he had scrambled), bacon, maple syrup & butter. I was a totally basic bitch and went for Smashed Avocado & Poached Eggs on toasted rye bread with extra bacon. We also got a side of hash browns, because I can’t go for brunch without consuming some kind of fried potato product. 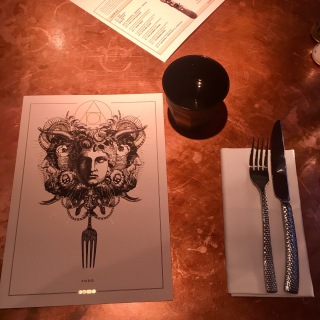 Now we’ve all seen TONNES of perfectly produced examples of avo on toast, but believe me when I tell you that this version is honestly unlike ANYTHING I’ve ever had in Chester. The simple addition of sweet chilli sauce and fresh red chillies cuts through the creaminess of both the avocado and the egg, and by adding the salty bacon as well, every mouthful was multi-layered and heavenly.

I also have it on good authority that The American was; ‘very lovely, tasty, filling and generally very satisfying’… you can tell who writes about food and who doesn’t. I think a dish like The American is for someone who has a serious sweet tooth, but without the heaviness at the end (like you would have with thick pancakes for example).

After breakfast we were offered more cocktails; I politely declined as it had only just gone 12 and didn’t fancy stumbling home at 1pm. Instead we had a Cappuccino and a Latte which finished everything off perfectly.

All in all, I was very impressed with what The Alchemist had to offer. I think it fits in very well with the rest of Chester’s bar/restaurant scene, and is very likely to do well during the busy Chester Races season. One thing I will say is that I can’t imagine myself walking in to The Alchemist without having some kind of ‘special occasion’; as wonderful as it is, I probably wouldn’t pop in after just having finished a shift at work.

The Alchemist for me represents brunch with friends you haven’t seen in a while, going out for a girlfriend’s birthday, finishing off a successful shopping trip with prosecco and nibbles, a special family event or coming back from winning big at the races.

Whether you’re a local to Chester or you’re planning to pay it a visit, I urge you to give The Alchemist a try, I assure you, you won’t be disappointed.

I’d like to say thank you to everyone at The Alchemist who made it such a great experience (especially to our waiter, Alex), I’ll be paying a visit again soon!

*This meal was paid for in return for a review. The opinions and words are my own.

2 thoughts on “Brunch @ The Alchemist Chester”