Today I’m finally ready to add my 2-pence into an enormous collection of reviews about the coveted Kylie Cosmetics Lip Kits.

As I mentioned in my latest beauty ‘haul‘ post, I had waited patiently for months to finally get my hands on the kits that were (and still are, although now a bit more widely available) more valuable than Rocking Horse shit.
I suspect though that Rocking Horse shit would be less expensive and probably come without a customs charge…!

That aside, I happily paid about £65 for two kits (including the aforementioned customs charge) and finally got my hands on Koko K and Dolce K, how exciting.

I won’t bore you over details of packaging, we’ve all seen what the boxes look like, we know what the postcard says so it’s pointless me wasting time discussing ‘how much I love and support Kylie Jenner and the rest of the Kardashian clan’, they’re a guilty pleasure at best.
I’ll get down to the crux of the matter, the products themselves.

When the shades were first revealed, I’d set my heart on Dolce K. In the perfectly lit, super expensive press photos, it seemed like the nude lip colour of my dreams, the formula looked to die for and the photo’s of Dolce K on other beautiful sun-kissed 20-somethings had me completely sold.

When I finally got the lip colour in my hands, I’ll admit, my heart sank. I’d paid £30 for something I knew straight away wouldn’t really suit me.. or at least, I’d have to be quite brave to pull it off.
Dolce K, for a milk-bottle white, chubby round-faced girl, was too dark. It was far from the slightly-lighter-than-tan nude I had initially hoped for, what I held in my hand wasn’t a ‘nude’ shade, it was brown, and no I hadn’t mistakenly bought ‘True Brown’ instead; it was far from the press photos I had seen, and it was at that point I started to think I’d wasted my money. (I could feel my parents’ horror and disapproval permeate through the screen as I wrote that, by the way…) 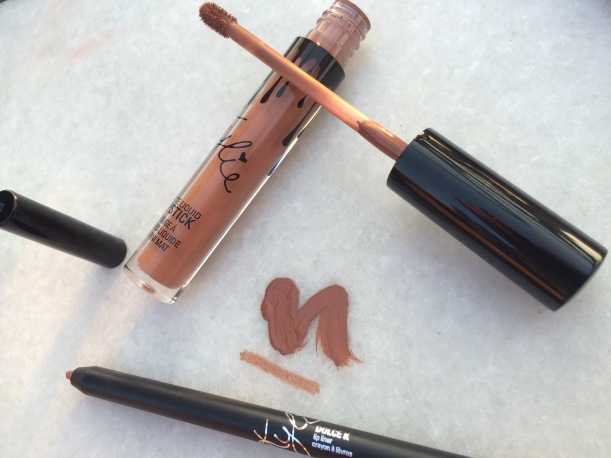 I bought Koko K on a bit of a whim. I don’t tend to wear light lip colours (I opt for bright pink/red/purple – ‘statement’ lips, you get the idea) especially light pink, but I got caught up in the excitement of actually being on the site and having an abundance of stock available to buy.

Having it in my hands, I thought it very light indeed, not something I would normally go for. That said, it seemed slightly more promising than my once beloved Dolce K.

I tried Dolce K first, I didn’t bother with the lip liner because, truth be told, I don’t own any lip liners normally anyway, I tend to just slap on the lipstick (with the upmost care, attention and precision) and go. In a way, buying the whole kit was a wasted enterprise…

Anyway, I threw on a couple of coats and stood back, hoping it wasn’t as dark and unsuitable as I’d first thought. Thankfully I was pleasantly surprised, while the colour dried into quite a dark brown (after applying 2 coats), it wasn’t a complete abomination, and with the right nude eye combo, I suspected it would actually look quite nice! 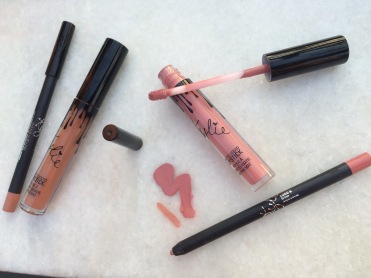 Koko K came next, and I have to say I was slightly disappointed. As I’d said before, it is a very pale shade, so much so that I could barely tell it was there, even after applying a few coats. The shade looks like a stronger pink in the tube than set on the lips; there it looks like a dusty pink that I’m sure would look lovely on someone with a darker skin-tone, or perhaps I need to apply some fake-tan before I wear this shade.

So after all the worry that I’d properly wasted my money (though I still felt a little cheated), Dolce K has ended up being the preferred shade. In fact, I’d say I’ve used Dolce K a lot more frequently than Koko K, just because I can’t help feeling that little bit more sassy and fierce. I tend to save Koko K for my quieter makeup days.

Now what of that ‘dreamy’ formula I’ve seen so many bloggers rave about?
‘Oh it’s so comfortable to wear and mattes beautifully…’

I mean, maybe I’m applying it wrong, maybe I need to cover the whole lip in the lip liner before applying the colour, maybe I need to baste my lips in lip balm before using this product.. who knows.
What I DO know is that this shit drys on your lips like cement. Woe betide you should move your lips once you’ve applied this stuff because you’ll reveal lip wrinkles you didn’t know you had.

Hell, you didn’t know lip wrinkles were even a problem, they sure as shit are now!

Yes the colour payoff is strong, and yes it does become very matte very quickly but sadly I can’t stand to wear this product for very long. It becomes uncomfortable quite quickly and drys my lips out an awful lot, after a while it starts to look cracked and a less than appealing, so to counteract that I tend to re-apply which starts the vicious circle all over again.
I initially tend to apply 2/3 coats to achieve an even colour, however as I’ve said before, the formula drys so much you can guarantee it won’t be budging from your lips for anything.
Even make-up removing wipes have a hard time chiselling it off!

This can work in your favour of course, there s no need to worry about it smudging when eating/drinking like you would a normal lipstick… so every cloud eh? 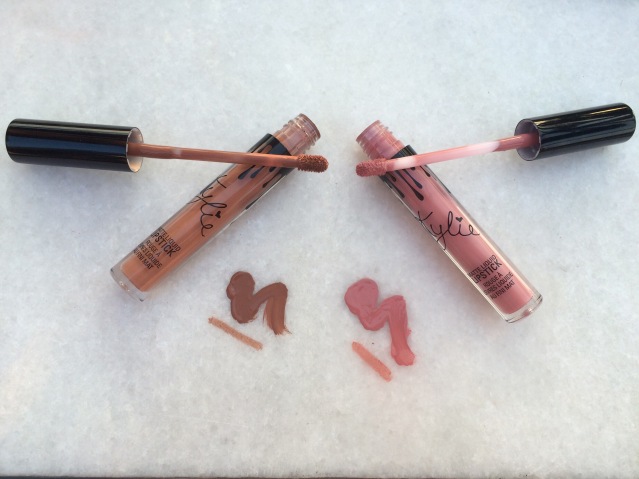 I think overall I’m sort-of happy about having bought the lip kits. Even though the shades aren’t quite what I’d initially hoped for, I’ve spent too much to let them sit and gather dust in my make-up bag. I probably wouldn’t bother buying any other shades from Kylie Cosmetics, purely because there are cheaper, more comfortable products on the market that I can get hold of without having to worry about a customs charge (the mighty NYX Cosmetics, for example).
I would say if you were considering buying from Kylie Cosmetics, really do your research first, i.e. look at other bloggers reviews (with more true-to-life images) and don’t get swept up with the official press photos like I did!

I do enjoy wearing the lip colours though, in spite of everything. Dolce K has grown on me, it’s a little different to what I’d usually wear and little changes to routine can be a good thing.
Especially when you’re paying £65 for them…

Anyway, have you tried out these Lip Kit shades before? What are your thoughts on Kylie Cosmetics?
Comment below and let me know!

Till next time,
love, Leigh
xx